a rampaging Exeter M2 and an unfortunate crab rapidly put paid to M2’s hopes of a row-over. Down 3 over the week – but 2 weeks ago we weren’t expecting to even have an M2, and it’s thanks only to Jáchym Solecký that we got a boat out. So well done to all of them.

they held St. John’s off with relative ease, long enough for New to catch John’s and guaranteeing a straightforward row-over. Spoons avoided. As with M2, this crew suffered from severe depletion at the hands of exams – congratulations to them for avoiding the spoons that would have awaited a less dedicated crew.

a blading Green-Templeton proved too much off the start, and W1 had earned their spoons by Donnington Bridge. A shame for the women’s side that they had such powerful crews behind this week , but Bumps isn’t always fair. We await next year’s sequel, Revenge of the Martlet.

this was always going to be the hardest race of the week, and it was. Merely on station with Queen’s at Longbridges, a powerful pair-by-pair build on the Green Bank, slowly reeled them in. We crossed with half a length between us at Univ, and a final push broke a running Queen’s about 100m upstream of Worcester boathouse. This ex-Cantab thought he’d done Bumps racing, but the phenomenal roar of Boathouse Island on the Saturday of Eights is now seared in my memory. And Worcester College Men’s 1st VIII has won its blades! It has been a great pleasure captaining this group of men this term. WCBC is back.

Thanks to every spectator, supporter, marshal and umpire for making our week possible. See you in 9 months time, when Worcester goes to Torpids 2019.

rapidly caught by a fast Queens’ M2 on the entrance to the gut. Exeter M2 chase them tomorrow, they’re currently on +1 but we’ll just to see what speed they’re packing.

we wanted to hold Linacre off long enough to be caught by St. John’s, but unfortunately John’s soon dropped back. Linacre caught rapidly, yet a superb show of determination kept Worcester moving fast even as Linacre got 8 feet of overlap. The protracted bump finally occurred as they went to cross over on the Greenbank. St. John’s chase them tomorrow – can W2 manage a final-day row-over?

Wolfson W2, packed with rowers displaced from their W1 by 6 returning blues, were always going to be fierce. And, sadly, they were. Worcester were bumped shortly before Donnington Bridge. Green-Templeton chase them tomorrow.

Mansfield did their best, but Worcester reeled them just as fast as expected. 1 whistle a few strokes in, 2 whistles by the bridge, and it was all over by the entrance to the Gut. Tomorrow, Worcester chase Queens’ M1. Will it be +4 for Worcester?

A mishap on the start line sends them into the bank, unfortunately making life much easier for Benet’s M1. Being chased by Queens’ tomorrow, anything could happen.

Bumped outside City of Oxford by a classy Magdalen W2. Very bad luck having a crew like that behind them. Sandwich boat at the top of WDiv4 tomorrow, being chased by a Linacre crew – let’s hope this proves a better opportunity.

Bumped before Donnington Bridge by LMH W1. Let’s hope for better luck and a strong row-over tomorrow as Wolfson W2 chase them.

We said there’d be a Worc-Lincoln-Mansfield sandwich, and there certainly was. Worcester took a fly-or-die race plan (who needs a stride?), getting to one whistle just a few strokes in. We caught Lincoln with a desperate push on the exit of the gut, saving a grateful Mansfield from potential spoons with just a few seconds to spare. We’ll be chasing Mansfield tomorrow, maybe they can return the favour?

St. Benet’s Hall M1 close to 1/4 of a length rapidly off the start, but a heroic effort stops them gaining any more ground. Benet’s looked pretty broken as M2 cement their row over. Same tomorrow?

A fast Lincoln W2 catch Worcester on the entrance to the gut. Superb evasive coxing from Iona Woodward prolongs the race and we almost fed Lincoln to a ferocious Magdalen W2, but it was not to be.

A seat malfunction at stroke leaves Worcester wounded early in the race, and Exeter seize the opportunity. Will tomorrow bring revenge? Or will LMH be too much too handle?

Strong wind and atrocious chop weren’t enough to stop a charging Worcester, who emphatically bumped St. John’s M1 on the exit of the gut. Camron at bow even managed to reach over and grab their stern. Rumour has it Lincoln were losing ground to John’s – Worc-Lincoln-Mansfield sandwich likely tomorrow.

Sadly, Thursday and Friday were cancelled due to poor weather, and Saturday was run in half divisions, so only M1 and W1 got to race.

END_OF_DOCUMENT_TOKEN_TO_BE_REPLACED 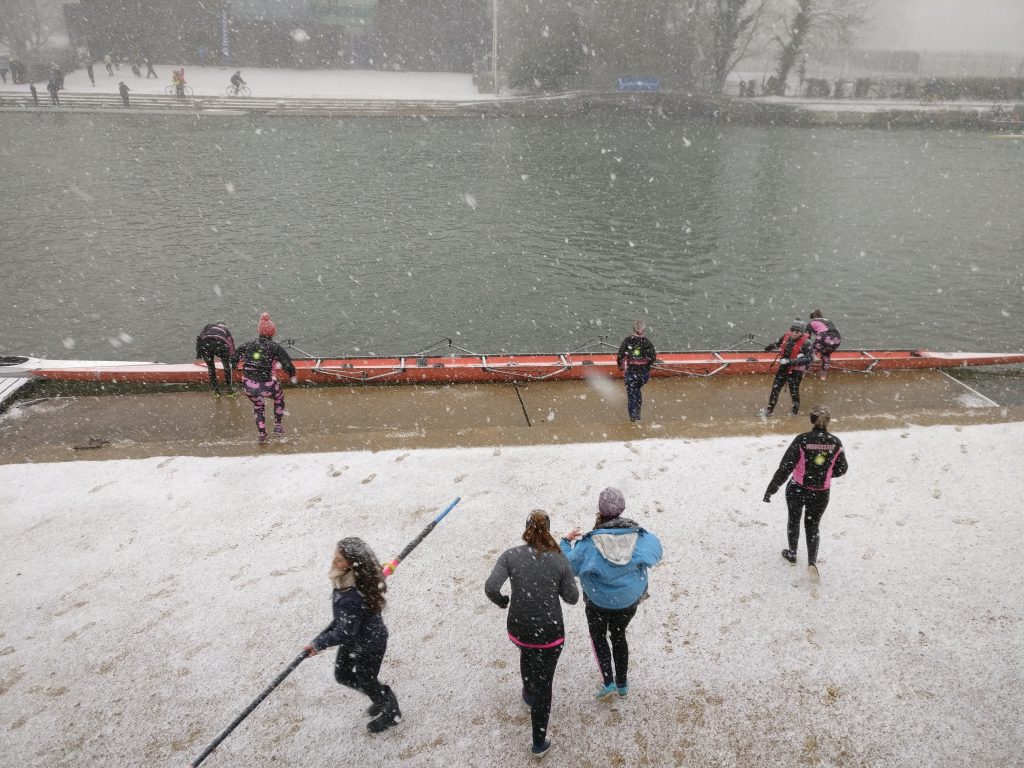 END_OF_DOCUMENT_TOKEN_TO_BE_REPLACED

Worcester’s WA were up against Trinity’s WB boat for their first race today. As expected, these girls delivered just like they did yesterday. A slow and tricky start had Trinity in the lead but our women were having none of it and with a surge in power they regained the distance and over-took trinity to the delight of the Worcester crowd on BH island. They maintained a lead overlap with a very determined Trinity but these girls know what they’re doing and a final power burst saw them cross the finish line with a win. This win had WA qualify for the next race only an hour later, as the last Worcester boat on the river these girls had a point to prove and after some re-fueling and length stretching these girls got back into the boat to face the dreaded Wolfson WA boat, who had already beaten our WB crew. The start of the race had both crews neck and neck, but unfortunately it wasn’t meant to be and WA did cross the finishing line second and thus ending our Christ Church regatta campaign. Worcester’s WA have lead a valiant campaign during this regatta, you’ve done us proud ladies!

WA raced against Christ Church WB. After some re-strategising overnight the girls headed off to the start line with confidence and determination. Spirits were high and heavily induced by an energetic and vocal 5 seat. An efficient and quick start had the girls power ahead of ChCh instantly and maintaining a length off the boat for the whole race. These girls are powerful and they’ve proved that today. Smiles were big post-race but exhaustion evident as a rate 40 was maintained for the entire race (wow).
Rest to come shortly!

WA raced Pembroke WA. A rocky start and a surge of power from bow side had them crash into a barge, as Pembroke overtook them. But a quick recovery and solid rowing had them catch up but not enough distance meant they lost the race. Despite this, today’s a new day and we’re expecting very positive results from the girls.

The men’s boat established dominance against St Anne’s early into the race. Gentleman as they are, they decided they’d give Anne’s a fighting chance by valiantly catching a crab and falling off of their seats. Sadly these efforts were largely ignored by St Annes and Worcester still won by a convincing 2 lengths.

WB had a really good race despite a bumpy row to the start line (they crashed into the bank, other boats you name it). Looked really good in 8s and smashed Exeter.

WC raced St. John’s, considering this was essentially their 3rd outing, rowing in 8s is a challenge to them. So considering they did this fine for the whole course is an achievement! Few crabs along the way….

Apologies for being a bit tardy with the race reports – here’s the results of our races: