Today saw the graduation of our amazing novices – an exciting day dawned for WCBC, only dampened by the river conditions…  Here are the race reports from today: 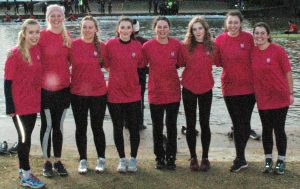 The crew pulled away from what looked like a well prepared Christ Church at start, with great coxing and a crab on their behalf put our cox at their bow pair.  But alas, a crustacean came to bite the girls back but was dealt swiftly and the lead was kept; finally cashing in a 10 on the legs to take them to a victory of one length.

Michelle Row-Bama will race LMH WB at 13:39 on Thursday. 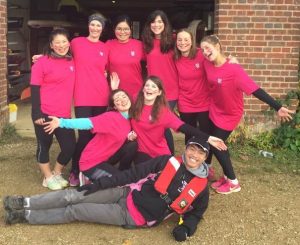 A very tidy St. John’s WA gave the boat a few nerves on the start line.  As the flag dropped, the strong and tidy crew of 8 flew off the start line, almost vapourising the stagger that St. John’s was given.  Both crews were level for about 300m, but as they rowed past Worcester, the cheers surged the boat ahead, giving the crew a half-length advantage.  Not satisfied with that margin, the girls put on a huge push as they rowed past Boathouse Island, absolutely destroying any hope of a John’s comeback, and finishing the race with a margin of one of a quarter lengths.

The Power Buff Girls will face Wolfson WA at 14:42 on Thursday. 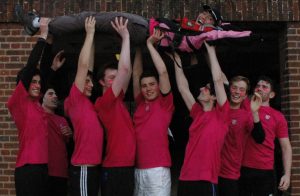 A very large Keble boat sat alongside the Worcester Men, but the Men kept their cool, with tactically timed “drops” sending sounds of confidence echoing across the Isis.  Despite sitting on City side with a dubiously small stagger, the Men flew off to a high rate start, staying level with the Keble boat up to the Worcester Boathouse.  However, the Nephthys runner ups surged ahead with their raw power, but the Men kept their composure, and rowed on powerfully and dutifully to the end, to a margin of three lengths.

The Worcester Men will row over tomorrow at 13:45 to cement their place in the second round on Friday. 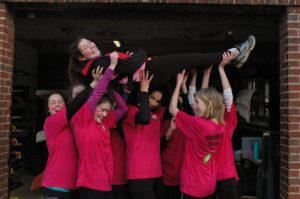 Destiny’s Children sprung off to a swift start, keeping close to Regent’s Park College over Boathouse Island but Regent’s strength from their ringers helped them to pull away (plus an unfortunate bow crab); so half a length of clear water as we finished strong at a fantastically high rate the whole way.

Destiny’s Children have a bye to the third round, and will race on Friday at 12:51.